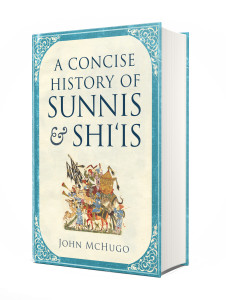 The 1400-year-old schism between Sunnis and Shi‘is has rarely seemed as toxic as it does today, feeding wars and communal strife in Syria, Iraq, Yemen, Pakistan, Afghanistan and many other countries, with tensions between Saudi Arabia and Iran escalating.

In this richly layered and engrossing account, John McHugo reveals how and why this divide occurred. Charting the story of Islam from the lifetime of the Prophet Muhammad to the present day, he describes the conflicts that raged over the succession to the Prophet, and how Sunnism and Shi‘ism evolved as different sects during the Abbasid caliphate while simultaneously remaining trends that influenced each other positively. The rivalry between the empires of the Sunni Ottomans and Shi‘i Safavids would contrive to ensure that the split  continued into modern times, but the challenge of the West frequently led to co-operation and a united front. Nevertheless, the split was always there. Now its full, destructive force has been brought out by the struggle between Saudi Arabia and Iran for the soul of the Muslim world.

Definitive and insightful, A Concise History of Sunnis and Shi‘is shows that there was nothing inevitable about the sectarian conflicts that now disfigure Islam. It is an essential guide to understanding the genesis, development and manipulation of the great schism that has come to define Islam and the Muslim world.

‘A Concise History of Sunnis and Shi’is is – for the uninitiated and well-versed alike – an enriching and valuable read’ – H.R.H. Prince Hassan of Jordan

‘A Concise History of Sunnis and Shi’is is an important corrective…provides the reader with not just all the historical background he or she could want, in an accessible and comprehensive fashion, but also employs this sound knowledge to a clear-headed appraisal of the modern Middle East’ – Times Literary Supplement

‘I would not hesitate to recommend this book or assign it to an advanced class of undergraduates’ – Christine Baker, International Journal of Middle East Studies

‘McHugo guides the reader through Muslim history from the time of the Prophet Muhammad, peace be upon him, until today, to reach a potentially game-changing conclusion: “Co-operation across the sectarian divide has always been possible. There is nothing inevitable about conflict between Sunnis and Shi’is”‘- The Jordan Times

‘In describing the turbulent epoch following the prophet’s death, McHugo offers a counterpoint to the “simplistic narrative…taking hold in the West” which rests on Sunnis and Shi’is being locked in a constant religious war.” He is always a lucid interpreter of sometimes complex events.’ – Law Society Gazette

‘McHugo does a smashing job of making all this accessible to a non-Muslim, non-specialist audience’ – Jewish Herald Voice