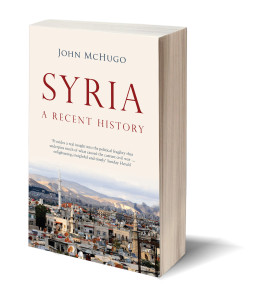 Syria’s descent into civil war has claimed hundreds of thousands of lives while more than nine million people have fled their homes. This is now the greatest humanitarian and political crisis of the twenty-first century.

In this timely account, now updated to late 2017, John McHugo charts the history of Syria from the First World War to the present and considers why Syria’s foundations as a nation have proved so fragile. He examines the country’s thwarted attempts at independence under French rule before turning to more recent events: sectarian tensions, the pressures of international conflicts, two generations of rule by the Assads and the rise of ISIS.

As the conflict in Syria rages on, McHugo provides a rare and authoritative guide to a complex nation that demands our attention.

“This book does not provide any solutions to the current civil war, but it may help in the avoidance of mistakes. It gives a good sense of the deep complexity of Syrian politics and society” – John Bruton, former prime minister of Ireland.

‘[Provides] a real insight into the political fragility that underpins much of what caused the current civil war … Remarkably prescient.’ Sunday Herald

‘An engagingly written primer that is essential reading for anyone who wishes to understand the roots of that country’s ongoing agony…[McHugo’s] last chapter, in which he dissects sectarianism in Syria and the possible outcomes of the civil war, should be required reading for all who believe that tribalism and primordial hatreds are the key drivers of Middle Eastern politics’  James L. Gelvin, author of The Arab Uprisings: What Everyone Needs to Know

‘The author uncovers uncanny parallels between the pacification strategies of the French in the 1920s and the Bashar al-Assad regime today, exposing the continuous role of violence in the region’s (flawed) state formation’ Raymond Hinnebusch, Centre for Syrian Studies, University of St Andrews

‘A  most welcome addition to the growing body of literature on Syria…The author expertly weaves the repercussions of a century of regional and international interference in Syrian affairs into his narrative of cause and effect regarding the tumultuous events of recent years’ David W. Lesch, author of Syria: The Fall of the House of Assad

‘A fluent introduction to Syria’s recent past, this book provides the backstory to the country’s collapse into brutal civil conflict’ Andrew Arsan, St John’s College, University of Cambridge

‘A work of great ambition … Should be recommended reading for undergraduates, policy-makers and interested members of the public who wish to learn how Syria’s different communities are shaping the current civil war and are likely to be shaped by it.’ International Affairs

‘Anyone with any interest in Middle Eastern history and politics must read Syria. There was a need for an accessible guide to the past century of history, which this admirably provides.’
Geographical Magazine